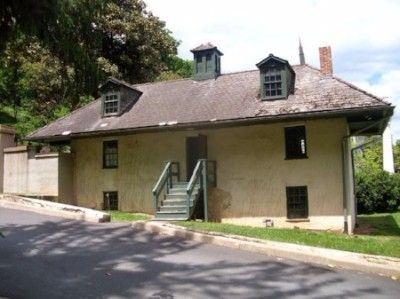 PROJECT SCOPE Rehabilitation work is underway at Morven Park’s historic laundry / dairy building! The scope of work for this year and 2017 includes replacement of the failing stucco, repair of the rotted woodwork and replacement of the outdated roof. All the work will be completed in accordance with the Secretary of the Interiors Guidelines for Rehabilitation as well as Morven Park’s own high standards of preservation and conservation.

WHY IS THIS WORK NEEDED? Morven Park staff currently believes that the building is one of the original 19th century outbuildings constructed either by Thomas Swann, Sr., around 1820, or by his son, Thomas Swann, Jr. during his renovations of 1858-1861. The building is constructed of local fieldstone and lime mortar and was clad in lime based stucco with a scored finish resembling cut sandstone blocks. This method of construction and finishing was popular during both the 1820s and 1850s. The finish on the Laundry Dairy building matched the c.1825 finish on the Greek Revival mansion.

The Laundry / Dairy, like all of the buildings at Morven Park, has undergone numerous alterations over the last two centuries. Some of these alterations are related to changing uses of the buildings while others are tied to material replacements. For example, the roof of the Laundry Dairy is clad with shingles that date to the early 20th century. These shingles most likely replaced an early standing seam metal, wood shingle or slate shingle roof.

Portions of the original lime stucco remain on the building, especially near the top of the wall, just under the eaves. Lower down the wall Portland cement was used to patch damaged stucco, starting around the turn of the 20th century. In the mid-1960s, when the property was being prepared to open to the public, an elastomeric coating was applied to the exterior of the building. This rubberized coating was intended to protect the fragile historic stucco from water infiltration. Unbeknownst at the time, this coating also held water in and along with the rigid Portland cement, accelerated the rate of deterioration of both the lime stucco and lime based mortar.

The lime stucco and most of the Portland stucco, is no longer adhered to the structure of the building. To ensure the building remains standing for generations to come, Morven Park is removing the stucco, Portland and elastomeric, exposing the stone construction for the first time in over 150 years. Next year, in 2017, a lime-based stucco, identical to the original in color and consistency, will be applied over the stone masonry. Not only will this return the building to its 19th century appearance, it will also protect the building for the next 50-75 years.

In addition to the stucco, the exterior wood work is also in need of repair. Although some replacement will be necessary, staff expects to be able to repair most of the existing woodwork. Any replacement pieces will match the existing wood in molding profile, dimensions and finish.

Further updates will be posted here as work continues. You can also follow the progress of this preservation project on Facebook - www.facebook.com/morvenpk.